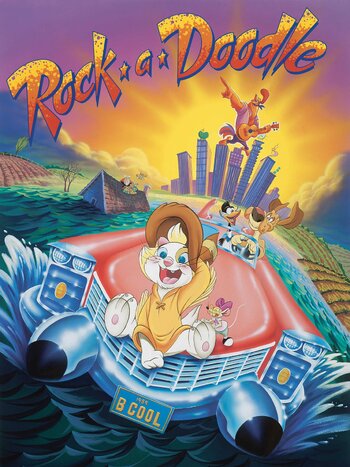 The rousing, rollicking adventure of the world's first rockin' rooster!
"Now I know an everyday sunrise might not seem like such a big deal to some folks, but imagine for a moment if instead of rising up like this; one morning where you lived, she took a look around and decided to go back to sleep? It happened once to us! Let me tell you all about it."
— Patou
Advertisement:

Rock-A-Doodle is a 1991 Don Bluth film and a very loose Adaptation Expansion of the tale of Chanticleer the rooster, who believed his crowing made the sun shine. It is also an equally loose adaptation of the play ''Chanticler''

by the French writer Edmond Rostand (also known for Cyrano de Bergerac), bearing little resemblance to it apart from some of the characters.

In this version, Chanticleer (voiced by Glen Campbell) is an affectionate caricature of Elvis Presley. After learning his singing doesn't raise the sun, he runs away to look for work in the city, and becomes a famous rock star. Wouldn't you know it, Chanticleer does raise the sun, so his friends run after him to try and convince him to come home and save the farm from the Grand Duke of Owls (Christopher Plummer), an evil wizard owl who hates the sun and wants it to rain forever. Fortunately, Chanticleer is disillusioned with his fame and fortune and fandom, and agrees to return to the farm and save the day—unless his manager Pinky the fox (Sorrell Booke), who is secretly in league with the Grand Duke, has anything to say about it.

The disastrous box office failure of the film led to the bankruptcy of Bluth's studio.

Although the film runs in the exact opposite direction of everything Don Bluth stood for (including purposefully toning down anything truly scary), the film at least includes the very pretty character and effects animation that Bluth is well known for — as well as quite a lot of his characteristic weirdness. A few folks even have warm nostalgia for the utter randomness and weird characters. And after all, the whole movie is supposed to be all just a sick kid's fever dream...note It does, however, end up turning out to be real.

A making-of featurette can be seen here.

This movie shows examples of...