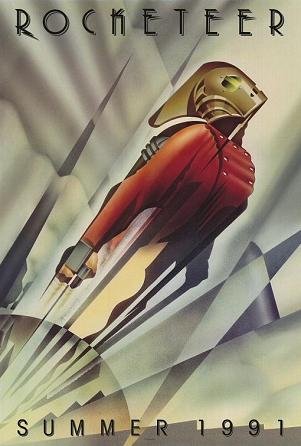 Howard Hughes: How did it feel, strapping that thing to your back and flying like a bat out of hell?
Cliff Secord: Well, it's the closest I'll ever get to heaven, Mr. Hughes.
Advertisement:

The Rocketeer is a 1991 Disney note released under the Walt Disney Pictures label in North America, and the Touchstone Pictures label overseas live-action film, adapted from Dave Stevens's series of comic books and directed by Joe Johnston, The Rocketeer follows the adventures of its titular hero: stunt pilot Cliff Secord, who uses a serendipitously found experimental rocket pack to fight crime in 1938 Los Angeles.

It was nominated for a Hugo in 1992, but lost to Terminator 2: Judgment Day.

On another note entirely, its primary musical theme by James Horner, Take Off, is practically a movie trailer standard.

A computer-animated television series for Disney Junior premiered in 2019 and focuses on Cliff Secord's great-grandaughter, Kit, who receives the helmet and rocket pack on her seventh birthday and becomes the new Rocketeer.

A sequel was first announced in 2016, after 25 years after the original's release, but it wouldn't enter active development until 2021 with the casting of David Oyelowo in the title role. The new film, titled The Return of the Rocketeer, will be released as a Disney+ original.