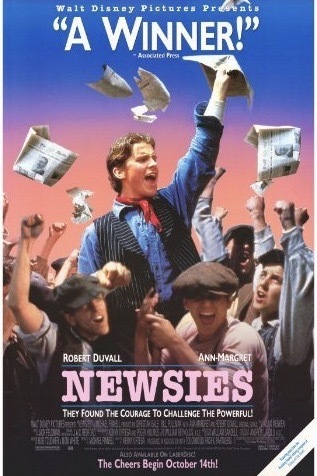 "Pulitzer may own the World, but he don't own us!"
Advertisement:

Newsies is a 1992 live-action Disney musical film. It is a Period Piece which follows the story of a group of newsboys in New York City in 1899, who strike against the city's biggest newspapers and their publishers after the price of newspapers goes up.

It was a box office bomb when it was first released and severely mocked by critics (Leonard Maltin went as far as calling it "Howard the Newsboy"), but a combination of releases on home video and DVD, airings on the Disney Channel, the Internet, and word of mouth has given it a monster-sized cult following. Swing and a miss, Maltin. A Broadway adaptation debuted in 2012 and was promptly sold out and showered in Tony nominations. It won two, for Best Choreography and Best Score, winning Alan Menken his first Tony.

It should also be noted that the film was directed by choreographer Kenny Ortega, who would go on to direct the High School Musical films. The cast includes Christian Bale, David Moscow, Bill Pullman, Max Casella, Robert Duvall, and Ann-Margret.

The horror-comedy film Blood Drips Heavily on Newsies Square was made on the set of this film.

"Seize the Day" depicts the newsboys resolving to strike against Pulitzer and Hearst for fairer treatment.

"Seize the Day" depicts the newsboys resolving to strike against Pulitzer and Hearst for fairer treatment.