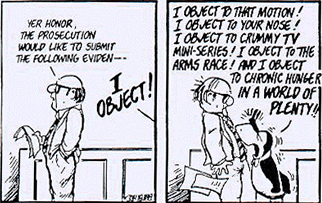 Fletcher: Your Honor, I object!
Judge: And why is that, Mr. Reede?
Fletcher: Because it's devastating to my case!
Judge: [dryly] Overruled.
Fletcher: Good call!
— Liar Liar
Advertisement:

When a lawyer goes: Your Honor, I Object! or Objection, Your Honor!, one would expect them to follow that up with a devastatingly accurate reason, which could either turn the tides of the court, or shut the other side down, hard. But when Courtroom Antics are involved, objections are usually followed by complete non-reasons like: "I object on the grounds that it sucks for me" or "I object for it being objectionable!"

Most would expect that such a nonsensical move would get the lawyer doing it a lot of flak, and have the objection overruled, and most of the time that is how it will go down. But one can take this up to eleven by having the objection somehow sustained.

Objections are used by lawyers in court when they feel the opposing lawyer has asked a witness an improper question that the court should not hear the answer to. In comedies, expect the phrase to be used by someone who isn't a lawyer at all, believing it to be something you say anytime you disagree with someone. Can be a case of I Always Wanted to Say That.

Intentionally excessive use of this (see Real Life below) can be a type of Chewbacca Defense. See also Disregard That Statement.

Alternative Title(s): This Was Objectionable