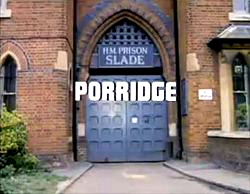 "Norman Stanley Fletcher, you have pleaded guilty to the charges brought by this court and it is now my duty to pass sentence. You are an habitual criminal who accepts arrest as an occupational hazard and presumably accepts imprisonment in the same casual manner. We therefore feel constrained to commit you to the maximum term allowed for these offences — you will go to prison for five years."
Advertisement:

Named after the slang for being imprisoned ("doing porridge"), Porridge is a prison comedy that aired on The BBC between 1973 and 1977 with three seasons, two Christmas specials and a film. It was written by Dick Clement and Ian La Frenais, who also wrote The Likely Lads and its sequel Whatever Happened to the Likely Lads?, and Auf Wiedersehen, Pet.

Set in the fictional Slade Prison, Porridge starred Ronnie Barker as Fletcher, a cynical and streetwise career criminal, and Richard Beckinsale as Godber, a naive first-time inmate. The plot centred around the prisoners' attempts to negotiate everyday life in prison and make it more bearable with "little victories" over the guards (primarily the stern Mr Mackay and the soft Mr Barrowclough), avoid trouble with the Prison Governor (who thinks he runs the place) and avoid the wrath of Harry Grout (an East End gang boss who really does).

For reference and interest, the prisoners and their crimes are:

Came seventh in Britain's Best Sitcom. The sequel, Going Straight, depicting Fletcher's life after his release, was also popular (though less so) and won a BAFTA but was limited to one series by actor Richard Beckinsale's very untimely death. In 2003, a Mockumentary, Norman Stanley Fletcher: Life Beyond The Box, gave a complete history of Fletch's life before and after the series, ending with him running a pub in Muswell Hill. This was Ronnie Barker's final TV appearance.

Inspired a short-lived American TV sitcom, On The Rocks. In 2016, a one-off special, simply titled Porridge, starred Kevin Bishop as Fletcher's grandson Nigel, who finds himself in prison for computer hacking and has similarly savvy gifts as his grandfather. A six-episode series followed in 2017.

Tropes used in Porridge include:

Tropes used in Going Straight include:

Tropes used in Norman Stanley Fletcher: Life Beyond The Box include:

Tropes used in the 2016 Porridge special include: