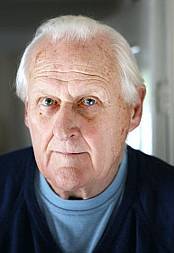 Peter Vaughan (4 April 1923 - 6 December 2016) was an English character actor, known for many supporting roles in a variety of British film and television productions.