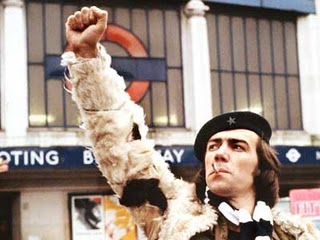 "POWER TO THE PEOPLE!"
Advertisement:

Citizen Smith starred Robert Lindsay as "Wolfie" Smith, a young Marxist urban revolutionary living in Tooting, South London, who is attempting to emulate his hero Che Guevara. Wolfie is the self-proclaimed leader of the Tooting Popular Front (in reality a small bunch of his friends), whose goals are "Power to the People" and "Freedom for Tooting". In reality, he is an unemployed dreamer and petty criminal whose plans fall through due to laziness and disorganisation.

Citizen Smith is a British television sitcom. The show was written by John Sullivan, who later wrote Only Fools and Horses. The pilot was transmitted on 12 April 1977 in the Comedy Special series of one-off plays, and the series proper ran from 3 November 1977 to 31 December 1980.

A novelisation was published in 1978.