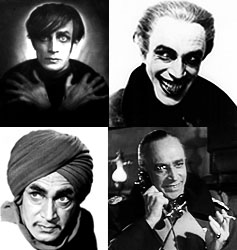 Let's face it, you've met this guy. Or someone based on him.
"When Conrad Veidt takes a movie heroine in his arms, every woman in the audience knows that he is just as likely to choke her as kiss her. Yet there's probably not a woman in the audience who wouldn't gladly change places with the imperiled heroine."
— Hollywood magazine, 1942

Hans Walter Conrad Veidt (22 January 1893 – 3 April 1943) was a German-British actor and Trope Maker extraordinaire. Even if you don't recognize his name, it's very likely you've encountered someone based on one of his characters.

In 1919, he rose to fame playing Cesare—yes, that Cesare, the somnambulist in The Cabinet of Dr. Caligari. He followed this with a successful career playing tortured and demonic characters in the silents and later, with the advent of talkies, romantic heroes, sinister playboys and Nazi officers (despite being a staunch anti-Nazi in real life). In addition to the aforementioned Cesare, he inspired the appearance of The Joker (based on his mutilated Slasher Smile in The Man Who Laughs), epitomized the stereotypical Nazi Nobleman, and played the very first Grand Vizier Jafar on whom most subsequent evil "Arabian Nights" Days wizards were based.

Also, he was a certifiable badass in real life and spent his entire adult life campaigning for various human rights causes. In 1919, he starred in Different from the Others, the world's very first LGBT rights film. (Veidt himself was bisexual.) He had a high opinion of women and also starred in an early pro-choice film. In the Thirties, he made two films sympathetic to the plight of the Jews, which earned him personal hate mail from Hitler himself and sugary phone calls from Goebbels, who tried to persuade him into making propaganda films for the Nazis instead. In 1934, in order to stop him from making one of the films, the Nazis imprisoned him and tortured him with abuse and sleep deprivation, but he wouldn't budge. He escaped into England with his Jewish wife and continued to make films there. After war broke out, he donated his entire fortune to the Allied war effort and spent thousands of pounds helping out war children during the Blitz. In 1940, he left for Hollywood again and in a twist of irony, got repeatedly cast as Nazis. However, he accepted the parts exactly because he felt they were good propaganda against the Nazis, and sometimes donated his entire salary from the films to the British government. He personally helped several other European actors, including his Casablanca co-star Paul Henreid escape to the UK and the US by pulling strings and supporting them financially. Fans of Casablanca will note that this is the exact opposite of that movie's plot.

At the age of 50, he died suddenly of a massive heart attack on a Los Angeles golf course. The tropes he manifested, however, will live on...