Film / The Hands of Orlac 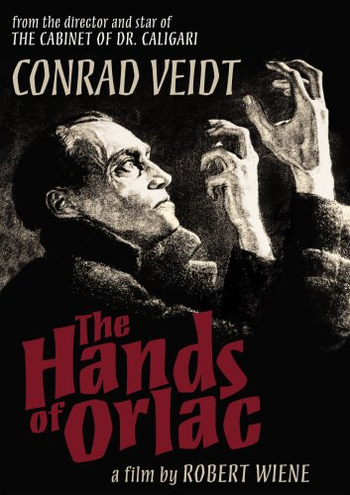 The Hands of Orlac (German: Orlacs Hände) is a 1924 Austrian silent horror film directed by Robert Wiene and starring Conrad Veidt, Alexandra Sorina and Fritz Kortner. The film was also released as Die Unheimlichen Hande des Doktor Orlac. The film's plot is based on the book Les Mains d'Orlac (1920) written by Maurice Renard.

Paul Orlac is a world famous pianist. One day he is badly hurt in a big train wreck. He is in danger of losing both his hands so his wife begs the doctors to save them. They eventually manage to transplant his hands with those of another deceased person. After his recovery Orlac discovers that there is something seriously wrong with his new pair of hands — it is as if they had a will of their own. But Orlac doesn't know that they actually belonged to a dangerous murderer.

The film has been remade three times: as Mad Love (1935) directed by Karl Freund, as The Hands of Orlac (1960), a British/French co-production, and as a low-budget American company as Hands of a Stranger (1962) directed by Newt Arnold.

Tropes in The Hands of Orlac include: