Film / The Spy in Black 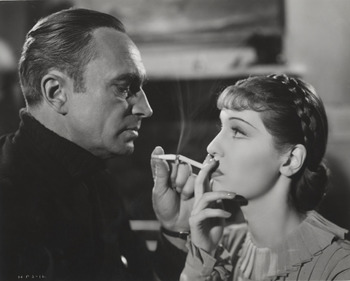 The Spy wants more than a drag of a cigarette...
Advertisement:

From the first collaboration between Michael Powell and Emeric Pressburger comes the British war thriller, The Spy in Black (1939). It stars Conrad Veidt, Valerie Hobson, Maruis Goring, and Sebastian Shaw.

During World War I, a German U-Boat commander is sent on a secret mission to infiltrate the Scottish Orkney Islands to destroy the British naval fleet stationed there, but an English school teacher will soon thwart his plans.

It was released in the U.S. as U-Boat 29. The score was composed by Miklós Rózsa.