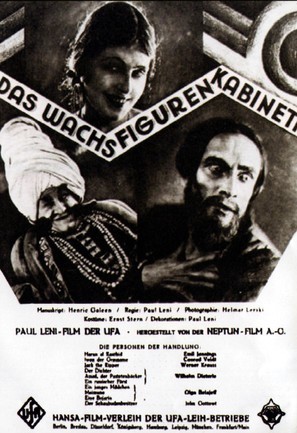 The main character, an unnamed poet played by William Dieterle, is hired by a wax museum's proprietor (John Gottowt) to write stories for three wax figures. With the proprietor's daughter (Olga Belajeff) leaning over his shoulder, the poet spins a series of fanciful tales. Each one stars himself and the girl while the wax character is cast as an antagonist of some kind.

The first story, which is by far the longest, focuses on Harun al-Rashid (Emil Jannings), the Caliph of Baghdad who features in several of the Arabian Nights stories. Portrayed here as an infantile, capricious tyrant, Harun wants to hook up with Zarah (Belajeff), the beautiful wife of Assad the baker (Dieterle). At the same time, Assad wants to steal Harun's magic wishing ring.

The next story follows Ivan the Terrible (Conrad Veidt), portrayed as a blood-soaked despot of Tsarist Russia. When Ivan becomes paranoid about his poison-mixer plotting against him, he has him executed, but the poison-mixer leaves behind a little surprise for the Tsar. Meanwhile, Ivan takes over a wedding, claiming the bride (Belajeff) for himself and arresting the groom (Dieterle).

The last story is very short, running only a few minutes. Its leading character, played by Werner Krauss, is interchangeably referred to as Spring-Heeled Jack and Jack the Ripper. In short, the poet falls asleep while trying to write the last story and dreams that he and the girl are being terrorized by Jack.

Not to be confused with The '80s horror film Waxwork.