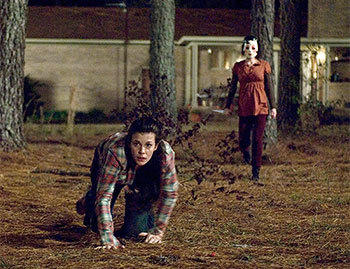 Don't mind me, I just like taking my time.
Bill: If he's chasing us, he's moving very slowly.
The Doctor: Do you know what it means when something chases you very slowly?
Bill: What?
The Doctor: It means there's a reason that they don't have to run.
— Doctor Who, "Smile"
Advertisement:

Did you really think you could defeat me? With that little peashooter? This farce ends here!

This is where a villain, or Anti-Hero, will have an enemy at their mercy and instead of immediately shooting them, they'll slowly walk towards them. This is for no other reason other than to impress into the would-be victim that they are completely at their mercy. So much so that there is no reason to hurry since there is nothing their victim can do that would so much as hinder them. Another reason a villain or Anti-Hero will engage in this behavior is to savor the moment as long as they can. This is intended to increase their scare factor or evilness. Very rarely will the question of Why Don't You Just Shoot Him? cause this to backfire as this is intended to develop their character and establish them as a villain or anti-hero. It can also be combined with Smoke Shield or Out of the Inferno for maximum impact if they've been hit with something explosive.

A common characteristic of Westerns and generally used to show who has the upper hand in a gunfight.

If this trope is invoked (or worse, Unflinching Walk) it is very likely you have an Implacable Man on your hands. Compare The Slow Walk and Menacing Stroll.