Curse of the Pharaoh 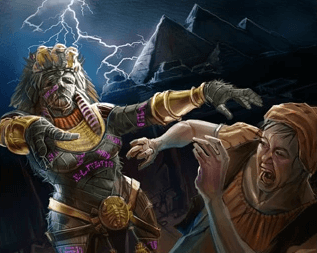 "There is no one in this world who can ever be my master. All who enter beware the Wrath of the Pharaoh."
— Anubis, Soul Eater

An Adventurer Archaeologist just discovered a new pyramid from Ancient Egypt, and decides to explore it, getting hit by an incredibly lethal curse in the process. Or, if you want to include an Asshole Victim, just somebody who was interested in Robbing the Dead, often ending in Death by Materialism.

This concept became popularized in Western media after the discovery of King Tutankhamun's tomb in 1922 led to a rise in interest in Ancient Egypt. Shortly after the excavation, over twenty people died in short order, including its financier Lord Carnarvon. Magazines took these events to be the "Curse of Tutankhamun", printing stories claiming that King Tut's tomb was engraved with hieroglyphs warning that "death would swiftly follow" those who disturbed the Pharaoh's eternal slumber. In reality, nothing of the sort was written anywhere in the tomb, the idea being entirely made up to sell a story and all the deaths being basically accidents befalling a tiny portion of the over a hundred people involved in the excavations.note The curse was awfully slow to kill Howard Carter, the guy in charge of the Tutankhamun expedition and the guy who physically opened the tomb. He died of cancer 16 years later.

Sub-Trope of Curse. May have been set by a Nepharious Pharaoh and/or involve a Mummy. The pyramid itself is an Ancient Tomb, and may be a Temple of Doom full of Death Traps.