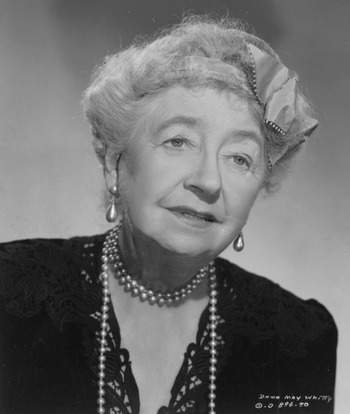 "I've got everything Betty Grable has — I've just had it longer."
Advertisement:

Dame May Whitty, born as Mary Louise Webster (19 June 1865 — 29 May 1948) was an English actress who appeared in movies throughout The Golden Age of Hollywood. She is most notable for being the second actress to ever be awarded a Damehood (she got it for her charity work during the First World War) and the first actress in Hollywood to have her name credited with her formal title.

Although an accomplished actress who appeared in the West End in the late 19th century and on Broadway, she didn't appear in a Hollywood film until 1937 when she was 72. She did, however, appear in a few British silent films in the 1910s. She was nominated twice for an Academy Award, both for Supporting Actress, but never won.