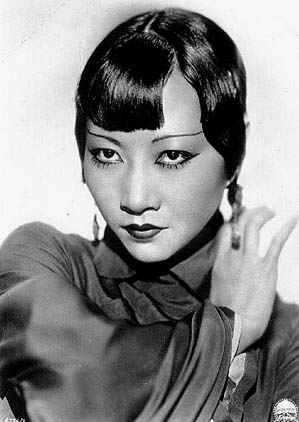 "[Anna May Wong] built up a level of stardom but Hollywood didn't know what to do with her."
— David Schwartz
Advertisement:

Anna May Wong (January 3, 1905 – February 3, 1961) was an American actress, and is nowadays recognised as the first Chinese-American movie star. Born to second generation Chinese-American parents in Los Angeles with the birth name Wong Liu Tsong, Anna May quickly became enamoured with the movies and worked as an extra during her teenage years. Her first starring role came at the age of seventeen in The Toll of the Sea, one of the first Technicolor movies. The Hollywood Hype Machine got behind her, "She should be seen again, and often, on the big screen", and a notable supporting turn in The Thief of Bagdad (1924) brought her to international attention. There was, however, one problem. Her race.

Reluctant to feature an Asian-American actress as a female lead, Hollywood instead cast Anna May in supporting roles playing stereotypical Chinese characters, often of the Dragon Lady type. Part of the problem was The Hays Code, which forbade any depiction of "miscegenation". She could not be shown kissing a white actor, or be cast as his wife, girlfriend etc., even if he was playing an Asian character, and the only Asian leading man in Hollywood at the time was Sessue Hayakawa (With whom she starred in just one film, Daughter of the Dragon). This led to the biggest disappointment of her career, when she was passed over for the role of O-Lan in a film adaptation of The Good Earth, despite the newspapers hyping her up as a shoo-in for the part, because The Hays Code prevented her from being cast as the wife of the white Paul Muni, even though he was playing a Chinese character. She turned down the unsympathetic part of The Vamp Lotus, and took her career to Europe and Asia, where she was able to play the type of characters she wanted. She did return to America, playing some non-stereotypical characters in B-movies, some of which were actually written for her (Daughter of Shanghai for instance). Her health worsened in later years and she died of a heart attack just before she was to star in the film adaptation of Flower Drum Song.

Although she didn't have the career that was predicted in her youth, Anna May Wong is recognised today as a pioneer in terms of the way Asian-Americans were represented on the big screen. During a period where Asian-Americans were viewed as perpetually foreign by American society, Anna May's public image showed her as a hybrid between two cultures that society painted as impossibly different. In her life she was also a fashion icon, getting voted "World's Best Dressed Woman" by the Mayfair Mannequin Society of New York in 1934. She was also awarded an honorary doctorate by Peking University in 1932 - the first time it had ever been given to an actor.

She's depicted as one the "Four Ladies of Hollywood" on a 30-foot sculpture designed by Catherine Hardwicke at the western end of the Hollywood Walk of Fame, along with Dorothy Dandridge, Dolores del Río and Mae West. In 2021, the US government announced that she would be honored by having her face used as part of the American Women Quarters program, making her the first person of Asian descent to appear on American currency.