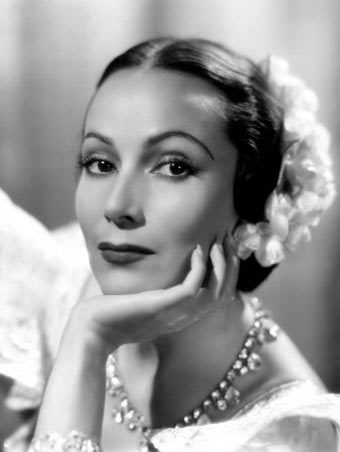 "Hollywood needs a high-society Mexican woman, one who may have been exposed to foreign culture and customs through travel, but who maintains the customs and the traces of the Mexican land. And then, the vulgar and picturesque stereotype, so damaging because it falsities our image, will disappear naturally. This is my goal in Hollywood: All my efforts are turned toward filling this gap in the cinema. If I achieve this it will be the height of my artistic ambition and perhaps I'll give a small glory for Mexico. "I'd love to appear in fine, emotional dramas...and am eager to play in stories concerning my native people, the Mexican race. It is my dearest wish to make fans realize their real beauty, their wonder, their greatness as a people. The vast majority seem to regard Mexicans as a race of bandits, or laborers, dirty, unkempt, and uneducated. My ambition is to show the best that's in my nation".
Advertisement:

Dolores del Río, born María de los Dolores Asúnsolo López-Negrete (August 3rd 1904 note The year of her birth is disputed, often being written as 1905, however, a travel manifest dating 1919 stated that she was 15 at the time. — April 11th 1983) was a Mexican actress who is best known as one of the first Latina actresses to appear in the early years of Hollywood, having many successes in silent movies, The Pre Code Era and The Golden Age of Hollywood.

Del Rio began her performing arts career by becoming a dancer as a teenager, travelling around Europe with a dance troupe performing for royalty. She was spotted by Edwin Carewe in 1925, who invited her to Hollywood, determined to make her a successful movie star, despite del Rio's family opposing the idea. She arrived in Hollywood with Carewe posing as her agent, who shortened her name and promoted her as the newest exotic icon, however, her first film Joanna (a silent picture) only gave her a five-minute appearance. After two lackluster films, del Rio appeared in Raoul Walsh's What Price Glory, which was one of the most successful films of the year, making over $2 million worldwide and turning del Rio into an overnight sensation.

With film studios developing and demanding to borrow Dolores for their projects, the relationship between Del Rio and Carewe turned sour, to the point of settling in court, resulting in Carewe trying to invoke a film star rivalry between Del Rio and hiring the equally popular Mexican actress Lupe Velez to get top billing his movies. Meanwhile, Hollywood was worried about the development of sound movies destroying many careers, but it turned out that there was no need, especially with Del Rio, whose Mexican accent and perfect English charmed audiences, increasing her exotic beauty. She was hired by RKO Pictures in 1930 and appeared in the successful movies Flying Down to Rio and Bird Of Paradise — the latter creating controversy due to a scene of her swimming naked. Del Rio was still in demand with Warner Bros. borrowing her for a few successful films as well from a variety of genres, including musicals and espionage, however, she became box office poison in 1938, along with Katharine Hepburn, Fred Astaire, Joan Crawford, Marlene Dietrich, among others. She returned to Mexico in 1942.

Del Rio appeared in a variety of Mexican Spanish-languaged films with famous Mexican directors and actors, winning a Silver Ariel award (Mexican equivalent to an Oscar) for the 1944 film Las Abandonadas. She also appeared alongside Henry Fonda in a John Ford-directed film called The Fugitive and then appeared in an Argentinian film; both movies faced a backlash in an era of The Hollywood Blacklist. She continued appearing in Latin-American films throughout the rest of her career, often appearing on the stage. She returned to Hollywood in the 1950s and made many film and television appearances, ending her film career with The Children Of Sanchez in 1978, and her television career in 1970 in an episode of Marcus Welby, M.D.

Del Rio died from liver disease in 1983, but is far from being forgotten. Her legacy helped the Hollywood careers of several Latina actresses from Carmen Miranda to the likes of Jennifer Lopez and Penélope Cruz. She is often called one of the most beautiful actresses of classic Hollywood by critics and staff that had known her during her career; director Josef von Sternberg reportedly claimed that Del Rio, Marlene Dietrich, Rita Hayworth and Carole Lombard defined Hollywood glamour, even though Del Rio didn't enjoy being the "Latina bombshell". She has a star on the Hollywood Walk of Fame and a Four Ladies of Hollywood statue, along with Mae West, Dorothy Dandridge, and Anna May Wong.