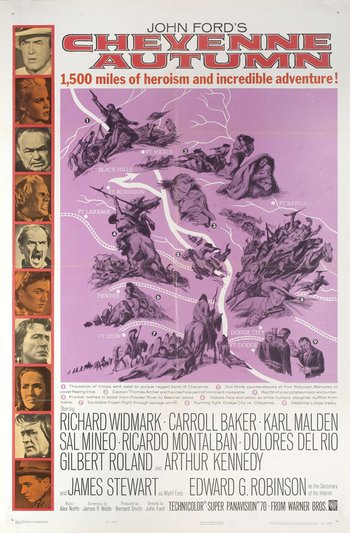 Cheyenne Autumn is a 1964 film directed by John Ford. It's an Epic Western telling the story of the 1878 incident usually known as the Northern Cheyenne Exodus.

A band of the Cheyenne Nation has been relocated from their homeland in Wyoming to a Cavalry-run camp in Oklahoma. After experiencing disease, humiliation and indifference, they decide to leave the camp and make the 1,500-mile trek back home. The Cavalry pursues them, but their commander, Capt. Thomas Archer (Richard Widmark), has some sympathy for the Cheyenne and their cause. Also, Deborah Wright (Carroll Baker), a Quaker schoolteacher who Archer has fallen in love with, is part of the trek, joining after she decides that her young students need protection on the trail.

Meanwhile, among the Cheyenne themselves there's a power struggle between their two strong leaders, bold Little Wolf (Ricardo Montalbán) and pragmatic Dull Knife (Gilbert Roland). As their trek arouses curiosity and fear—shown in part with a long, largely non-plot-related segment where Dodge City residents start panicking while Wyatt Earp (Jimmy Stewart) and Doc Holliday (Arthur Kennedy) are immersed in a card game—the tribe splits up, and Dull Knife's group (including Deborah) petitions for help at Fort Robinson in Nebraska. But the fort's commander, Capt. Oskar Wessels (Karl Malden), a German immigrant eager for a promotion, imprisons them in a warehouse in the dead of winter, leading to a shocking turn of events. It's up to Secretary of the Interior Carl Schurz (Edward G. Robinson) to straighten everything out.

The final Western directed by Ford, he decided the "Indians vs. Cavalry" genre needed to finally tell the native side of the story. Already aware at that point that his films tended to portray Native Americans negatively (though films like The Searchers were more nuanced than many people would give them credit for), it's usually acknowledged that Ford had his heart in the right place with this film, showing the Cheyenne to be proud, intelligent and determined. But having two blonde-haired, blue eyed leads representing two sides of the White Man's Burden (a military officer and a teacher), then having the lead Cheyenne characters played by either Mexican actors or dark-skinned White Americans, with the extras recruited from the wholly-unrelated Navajo Nation, is seen as unintentionally undermining Ford's goals for the film. Still, any 1964 Western portraying Indians positively is quite remarkable. And for the last time, Ford showed his beloved Monument Valley in all its glory (standing in for the plains of Oklahoma, Kansas and Nebraska).