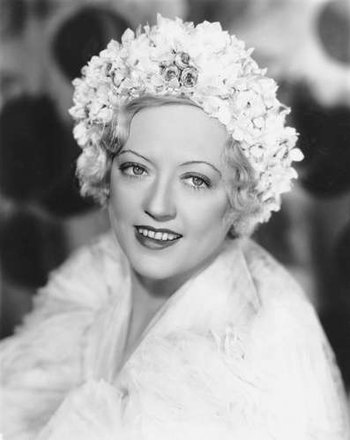 Marion Cecilia Davies (née Douras; January 3, 1897 – September 22, 1961) was an American actress. When she became the mistress of newspaper tycoon William Randolph Hearst, he took over management of her career, financing her films and publicizing them in his papers.

You probably know her as the purported basis for the Susan Alexander character in Citizen Kane. For the record, Davies was not as dreadfully untalented as her fictional counterpart, and Orson Welles later regretted the unflattering portrayal. However, many feel that Davies was a gifted comic actress ill-suited to the lavish historical epics that Hearst insisted on showcasing her in.

She was also known for having quite a noticeable stutter; fortunately it never manifested itself onscreen, but in everyday life, it never went away. However, given her beauty and charisma, it was more of an endearing Charm Point than a flaw.