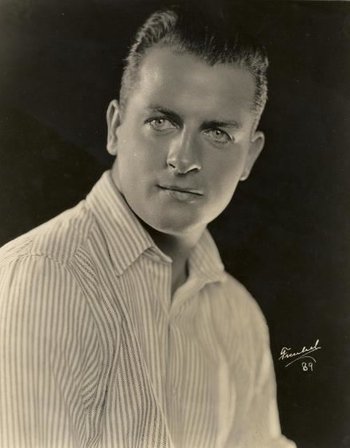 Reginald Denny (born Reginald Leigh Dugmore; 20 November 1891 – 16 June 1967) was an English actor who appeared in Hollywood films from the early Silent Age to the tail end of the Golden Age.

These days, Denny isn't much remembered, mostly because when he came to Hollywood, he was often typecast as the quirky, stereotypically British Comic Relief. Ironically, he was in a lot of films that are celebrated today as classics, but always appearing in the supporting cast and overshadowed by the lead actors. However, this didn't stop Hollywood tabloids in the 1930s from giving him the reputation of a Mr. Fanservice, once describing him as a tanned, handsomely-dimpled man who had the body of a Greek god with bulging muscles as strong as steel springs — a compliment not even the most popular Hollywood leading men could boast of getting.

He was a sort of Renaissance Man throughout his life: not only did he act, but he was also once the best amateur boxer in the UK, sang as a teen in an opera company that toured India, and had a huge interest in planes, even purchasing a very successful plane company called Radioplane to create the first ever drones. Marilyn Monroe apparently worked at said company when she was discovered by Ronald Reagan's photographer, who brought her into fashion modelling.