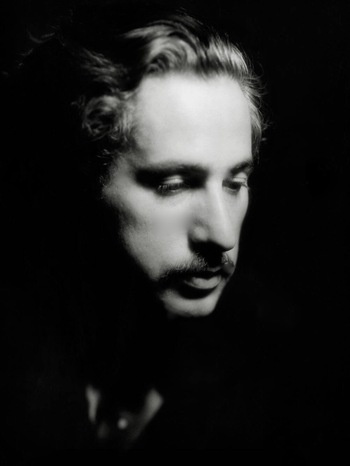 "I care nothing about the story, only how it is photographed and presented."
Advertisement:

Josef von Sternberg (born Jonas Sternberg; 29 May 1894 – 22 December 1969) was an Austrian-American film director whose career stretched from the 1920s to the 1950s. His films are a meeting of two worlds: one 20th-century, modern and forward-marching, the other 19th-century, decadent and dying.

Born in Vienna, Sternberg spent his childhood moving back and forth between there and New York City. He gained early film experience an an apprentice editor before serving in the US Army Signal Corps during World War I. He was one of the pioneers of silent era filmmaking, shooting on location in Los Angeles for his very first directorial effort, The Salvation Hunters. That film was made outside of the Hollywood system and had no hope of wide distribution; luckily, Sternberg had a friend who managed to secure it a private screening for a group that included Charlie Chaplin and Douglas Fairbanks. Chaplin was so impressed with the film's groundbreaking cinematography that he summoned the director to Hollywood and invited him to collaborate on a feature. That film, variously known as The Sea Gull and A Woman of the Sea, starred Chaplin's muse and leading lady Edna Purviance, but — for reasons that have never quite been made clear — Chaplin shelved it and then burnt the negative.note It was the only film Chaplin ever produced but did not himself direct.

Despite this, Sternberg got his foot into Hollywood and made several silent films that were technically brilliant and bold in content. They are (even by modern standards) provocative in sexual content, usually dealing with the Masochism Tango between men and women, whether in 19th-century Europe (The Last Command) or working-class America (The Docks of New York). He also directed proto-gangster films in Underworld and The Dragnet (now lost). Sternberg's visual style created self-contained worlds that seem to take place in an elaborate universe that was fastidiously lit and graded for varying tones of black, white and gray. Notably, Sternberg was the only major director of his generation to also be a member of the American Society of Cinematographers and took credit as director and DP on The Devil is a Woman.

Sternberg was The Perfectionist on a level that would make even Stanley Kubrick flinch. He would direct his films Prussian Drill Sergeant Nasty style and was a mean martinet to his cast and crew, with whom he would have epic fights. As an aesthete who believed passionately in Doing It for the Art, he also clashed with producers.

When sound arrived, Sternberg was in Germany making a film with Emil Jannings, the top German star of the time. For the film's lead heroine, Sternberg cast a young actress who appeared in a few German films but hadn't been noticed yet. The film was The Blue Angel and the actress was Marlene Dietrich, who stole the film with her iconic performance as "Lola Lola". She and Sternberg fell in love and became a Creator Couple with Sternberg making several pre-Hays-Code films that made Dietrich one of the greatest actresses in film history and a Hollywood icon that no one would forget. These films were pessimistic about relationships and regarded romantic love and its cliches with a contempt that, needless to say, did not always translate to box office glory. Films like Morocco (which featured the first Lesbian kiss in film history) and the anti-heroic biopic of the Catherine the Great (The Scarlet Empress) have to be seen to be disbelieved. His films were further known for their incredibly glamorous set and costume designs.

When the The Hays Code went into effect, Sternberg and Dietrich were no longer together and Sternberg, no longer able to tackle his preferred material, struggled afterwards. A 1937 production of I, Claudius, starring Charles Laughton, Merle Oberon and produced by Alexander Korda, was intended to be his most commercial venture, an Epic Movie on Rome based on Robert Graves novel, but the Troubled Production, as a result of clashes between Sternberg/Korda/Laughton topped by a car accident suffered by Obern a month into production led the production to be halted in the middle, leaving only rushes. This tarnished his reputation within the film fraternity and he never again mounted a big scale production, working on smaller budgets. His only well-known Code era film was The Shanghai Gesture, a lurid film noir set in a landscape of decadence, compromise, sexual neurosis and girls in cages.

His final film was The Saga of Anatahan, which tackled the Japanese soldiers stranded in the wild not knowing the war was over. It was shot in Japan, in Japanese, with non-actors; Sternberg supplied an English voice-over. Released in 1951, it was ahead of its time, prefiguring the modern art movie. Sternberg then went into retirement. During this time, he wrote his autobiography, Fun in the Chinese Laundry, and also served as a teacher at UCLA's film program (where his students included future rock musicians Jim Morrison and Ray Manzarek of The Doors fame).

His films were highly influential on the likes of Alfred Hitchcock and Jorge Luis Borges, who cited him as his favorite filmmaker.