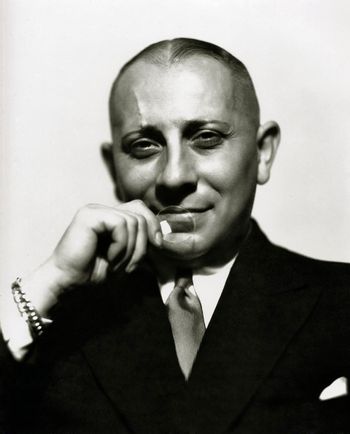 The Man You Love to Hate
Advertisement:

Erich Von Stroheim (born Erich Oswald Stroheim in Vienna, September 22, 1885 – May 12, 1957) was an Austrian film director, actor, and producer. When he emigrated to America in 1909 he added the aristocratic "von" and passed himself off as an Austrian count. (He was actually the son of a middle-class haberdasher.) Within a few years he had made it to Hollywood and was working as a stock player in D. W. Griffith's production company, as well as an assistant director. World War I provided von Stroheim with several parts as evil Germans, usually stereotypical monocled Junkers with riding crops. It was during this period that his studio, Universal, started billing him as "The Man You Love to Hate".

After the war ended the parts of evil German officers dried up, so von Stroheim wrote an original story, Blind Husbands, and managed to convince Universal not only to produce it but to let him direct. This began a ten-year directorial career for which von Stroheim is most remembered. He was the epitome of the Prima Donna Director as The Perfectionist. He was noted for being fastidious to levels not seen till Michael Cimino made Heaven's Gate, insisting on strict period detail (at great expense to the studio) in films like Blind Husbands, Foolish Wives and The Merry Widow. He was also known to be a major misogynist, proclaiming during a fight with Louis Mayer that all women were whores. Stroheim's bold commitment to his art and his uncompromising demeanor made him opposed to the rising Hollywood Studio System and his films suffered extensive Executive Meddling. In fact he was probably the first director whose films being Re-Cut was known to the public. The most spectacular instance of this was Greed, his epic adaptation of the novel Mc Teague which according to rumor was 9 hours in its original cut and later shortened by Stroheim to 6 hours and intended to be released in two parts. The producer Irving G. Thalberg took control of the film, cut it to two hours and the remaining footage was later burnt to save vault storage with the nitrate silver sold for salvage. Stroheim unsurprisingly regarded this as a travesty, though the industry and the press backed Thalberg at the time and Stroheim was vilified for being uncommercial and demanding. He suffered the same fate on his subsequent films too, with The Wedding March released in two parts (ironically the very arrangement denied to Greed) with the second part going missing in a vault fire at the Paris Cinematheque years later.

A bigger meltdown was Queen Kelly (1929), which starred Gloria Swanson and was produced by Joseph Kennedy (father of President John F. Kennedy). Swanson didn't like the direction von Stroheim was taking the film in and was horrified by the explicit sexual content. Kennedy, like every other producer von Stroheim ever had, was appalled by the out-of-control budget. Von Stroheim, as usual, didn't care what anyone else thought. Probably most importantly, Hollywood was just about done switching over to talkies by this point, but von Stroheim was filming Queen Kelly as a silent film. Kennedy fired von Stroheim and halted production.

After that von Stroheim was seen as Persona Non Grata and never directed a movie again. He still found work as an actor however, and appeared later in films like Renoir's The Grand Illusion where his performance was highly touted. His most famous performance is in Billy Wilder's Sunset Boulevard where he and Gloria Swanson are reunited with him playing her butler Max Von Mayerling, a thinly disguised Expy of himself. The clips of Norma Desmond's silent films in Sunset Boulevard is actual footage from Queen Kelly.

Stroheim's films were amazing and shocking at the time for the bold sexual content, the pessimistic portrayal of relationships, lack of Narm Charm, and unsentimental naturalistic performances, which greatly improved upon the expressionistic over-the-top acting in silent films. His Greed pioneered location shooting and deep focus years before Citizen Kane. His films are perhaps more accessible to audiences today than other silent masters like D. W. Griffith and Cecil B. DeMille, since they aren't piled with Victorian melodrama and sentimentality.