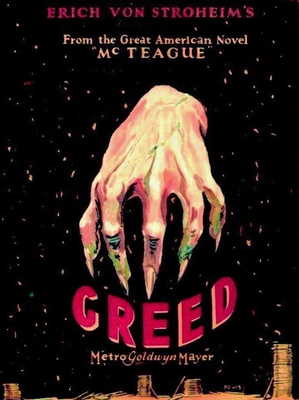 A 1924 silent psychological drama film directed by Erich von Stroheim, based on the novel Mc Teague by Frank Norris. John McTeague (Gibson Gowland) is a miner in the California gold country. A visiting dentist inspires him to try something new, and the dentist takes him on as an apprentice. McTeague eventually settles down as a dentist in San Francisco. His friend Marcus (Jean Hersholt) brings his girlfriend Trina (ZaSu Pitts) to McTeague as a patient. Marcus nobly steps aside when McTeague falls in love with Trina. McTeague and Trina are married.

In the meantime, Trina has bought a lottery ticket. Said ticket hits for five thousand dollars. Marcus becomes bitter at missing out on the money and has a falling out with McTeague. Trina for her part zealously guards the $5,000, refusing to spend a dime. She still won't spend any of it after Marcus rats out McTeague for practicing dentistry without a license, leaving the couple destitute. The McTeagues' formerly intimate marriage dissolves in hatred. Eventually McTeague murders Trina and takes off with the $5,000, fleeing to Death Valley, but Marcus is determined to track him down.

Greed is remembered as much (if not more) for what it isn't as for what it is. Von Stroheim's original cut was forty-two reels, or nearly eight hours. It is often considered the most "literal" film adaptation of a novel ever (the runtime is only two hours shy of that of the novel's unabridged audiobook). von Stroheim tried to talk the producers into showing the film in multiple parts, but eventually edited down to a four-hour cut. MGM eventually took the film out of von Stroheim's hands and released it with a running time of about two and a half hours. The shortened film was a flop, panned by critics and disowned by its director. It has, however, been Vindicated by History, and is commonly considered one of the masterpieces of silent cinema. The four-hour Director's Cut of Greed is sometimes called the "Holy Grail" of film archivists. No copy of the deleted footage has ever been found, but the twelve people who did see the full eight-hour version have deemed it one of the greatest films ever made.