Film / Greystoke: The Legend of Tarzan, Lord of the Apes 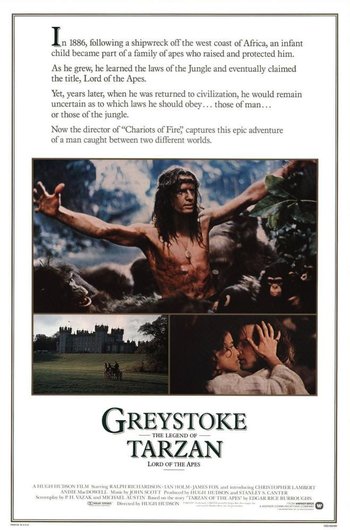 "Half of me is the Earl of Greystoke. The other half is wild."
Advertisement:

Greystoke: The Legend of Tarzan, Lord of the Apes is a 1984 movie inspired by the Tarzan novels. It was directed by Hugh Hudson (Chariots of Fire) from a screenplay by Robert Towne and starred Christopher Lambert in the title role.

It tells the story of John Clayton, the heir to the Earl of Greystoke, who is born in the jungle where his parents are marooned, and raised by apes after his parents die. As an adult, he is discovered by the explorer Philippe D'Arnot (Ian Holm) and returned to England and his remaining family, led by his grandfather the Earl (Ralph Richardson). This version of the story is less about swashbuckling jungle adventures and more about exploring his difficulties adjusting to the ways of human civilization.

Notably, the name "Tarzan" is never actually spoken at any point in the movie.