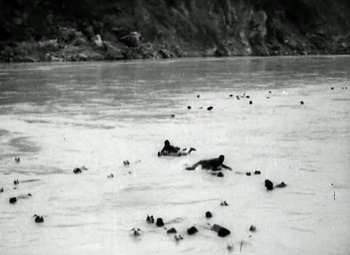 Crossing the river.
"They have reached the Promised Land—the Land of "Milk and Honey"—the Land of GRASS".
Advertisement:

Grass is a 1925 documentary film directed by Merian C. Cooper and Ernest B. Schoedsack. It is a record of the nomadic Bakhtiari tribe of Persia, 50,000 strong with 500,000 animals, as they make their seasonal migration to better winter pasture land. The filmmakers followed the Bakhtiari over the rugged desert of western Persia, across the unbridged Karun River, and over the nearly 14,000 foot Zard-Kuh Mountains, on their way to finding grass for their animals.

In 1976 another documentary, People Of The Wind, followed the Bakhtiari on the same journey in the other direction, to their summer pasture land.