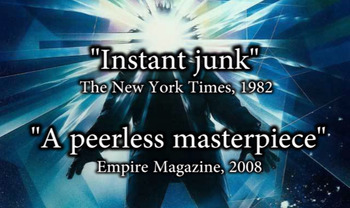 Turns out that bad reviews are really the warmest place to hide.
"Some are born posthumously."
— Friedrich Nietzsche, The Antichrist
Advertisement:

Then there are these.

A few exceptional (or lucky) works with unexceptional debuts will be rediscovered and reanalyzed, and in some cases may even become critical darlings or timeless classics in the eyes of the public after about 20 years, usually when their authors/producers are no longer around to bask in their belated fame. Unconventional and gloomily-themed works that star little-known actors are the most prone to this.

Inevitably causes most critics to rush to hail them as classics that were grossly misunderstood in their time, but now can be worshiped as the masterpieces they truly are. Oftentimes people in general forget that they were bombs to begin with. Parodies and Critical Backlash inevitably follow in their footsteps.

This is mostly a film/literature phenomenon: TV mostly avoids this, as how great or awful a series is tends to become clear during its longer run (or at least a few years later on DVD). Video games have a different problem in that Technology Marches On, turning old titles into Abandonware.

Then, of course, there are historical events that were controversial at the time, but later are felt to have been the right decision. Values Resonance is prevalent in many instances of this trope, as they were simply too far ahead of their time.

The Real Life counterpart of It Will Never Catch On. It can also lead to Follow the Leader, Hype Aversion, Hype Backlash. A Sub-Trope is Vindicated by Cable and Vindicated by Reruns; also arguably, as already mentioned, Better on DVD. Often these works were the victim of an Award Snub.

Compare Germans Love David Hasselhoff (when a different country does this instead of time), Cult Classic (when something gains popularity but not on a widespread/mainstream scale, although the two tropes sometimes overlap), Posthumous Popularity Potential (when the belated popularity occurs because the artist is no longer around to bask in it), Rescued from the Scrappy Heap (when this happens to a single character) and Acclaimed Flop (when the work is a critical success but a commercial failure when it comes out). See also Popularity Polynomial. Nostalgia Filter may factor into this, although anyone that hasn't grown up with the work will still likely see it for what it is. Contrast Condemned by History (when something goes from insanely popular to a popular target of mockery), And You Thought It Would Fail (when a work that's expected to be a flop instead becomes a smash hit) and "Seinfeld" Is Unfunny (when a work was beloved in its heyday, but is seen as boring or stale (at best) by history, though usually with the appreciation that the work was revolutionary at the time). See also Character Perception Evolution for when a character's reception changes over time.

Beware the risk of Overly Narrow Superlatives or Gushing About Shows You Like. Practically anything could seem vindicated by history if the reference pool is small enough.

Works must be at least five years old to be added. This is to ensure that history has judged the work more favourably than at release.