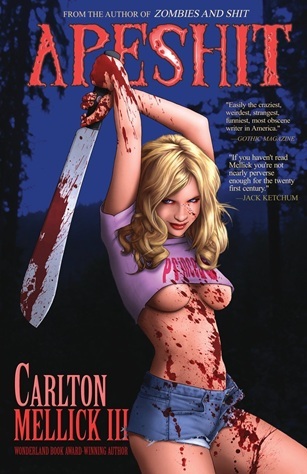 Apeshit is Carlton Mellick III’s love letter to the great and terrible B-horror movie genre. Six trendy teenagers (three cheerleaders and three football players) go to an isolated cabin in the mountains for a weekend of drinking, partying, and crazy sex, only to find themselves in the middle of a life and death struggle against a horribly mutated psychotic freak that just won’t stay dead.

Mellick parodies this horror cliché and twists it into something deeper and stranger. It is the literary equivalent of a grindhouse film. It is a splatterpunk’s wet dream. It is perhaps one of the most fucked up books ever written.

Be warned: Disturbing material lurks behind many of the spoiler tags. Reader discretion is advised.