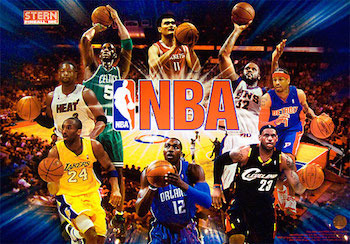 All we need now are Michael Jordan and Bugs Bunny.
Advertisement:

NBA is a 2009 Licensed Pinball Table from Stern Pinball. It was designed by Gary Stern, Ray Tanzer, and John Borg, with artwork by Kevin O'Connor.

As one would expect from a game named after the world's premiere Basketball league, NBA is all about shooting baskets, dazzling the crowds, and proving your worth on the court. Make baskets into the magnetic hoop for extra balls, collect the Triple Double, then get the Rebound for more points. While the spinning basketball on the playfield keeps things lively, complete the various All Star challenges, loop the orbits for the Fast Break, and become an MVP to activate double scoring. If you're good enough to get six World Champion rings, you can reach the NBA Finals and shoot for the basket before the clock runs out.

According to John Borg, NBA was originally planned for release only in China, and was designed as a relatively simple game for players who were unfamiliar with Pinball. However, budget cuts at Stern prompted management to release NBA in the west (with a few extra features) as an inexpensive way to bolster their library. A low production run keeps it fairly obscure; many players initially dismiss it as an overly simple game, but those who've learned the rules have discovered that there's actually a fairly deep challenge underneath.

Space Jam had the same time and scoring.