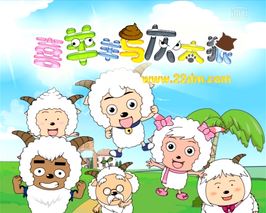 The main goats.note  Clockwise from top: Weslie, Tibbie, Jonie, Mr. Slowy, Sparky, Paddi
I look up, I look down, and everywhere I go
I'm happy there, I know, it's like a miracle
Even though I'm just a little goat
Because of me, the Earth is smiling
The beautiful sky is shining
Feel the summer wind a-blowing
Even though I'm just a little goat
I'm smarter than you can imagine
My happiness is bigger than the sky
Advertisement:
Because I follow the sun
No matter what happens, I won't let it upset me
When danger comes around to me, I won't let it get me
Even if a wolf tries to catch me, we'll just make it a game for us
With a smile in your heart, just keep on trying
When we fall, we get up and keep on flying
No matter what the weather, we can laugh our cares away
I'm just a little goat
—The English version of the original opening

Pleasant Goat and Big Big Wolf (喜羊羊与灰太狼) is a rather popular cartoon series in China, being one of, if not the, most successful pieces of animation the nation has ever domestically produced. Huang Weiming created it in 2005 at Creative Power Entertaining. The show has gone on ever since; with several seasons and ten movies to its name, the show has no end in sight.

A group of school-age goats lives and plays in the aptly-titled Goat Village. Weslie is the smart and positive hero who leads the goats. Paddi loves to eat and sleep. Sparky is The Big Guy who's strong and likes to exercise. Sparky has a crush on Tibbie, a sweet and emotional goat who always cares about her own fashion and appearance. Jonie is the kind and sensible class president. Mr. Slowy is the old, slow village chief who teaches the children life lessons and also creates inventions to help them.

In a castle outside of Goat Village lives the main villain Wolffy. His impatient wife Wolnie yells at him, forces him to do everything, and beats him with her frying pan. Despite this, Wolffy still cares for Wolnie, and Wolnie cares for Wolffy deep down. Wolffy has a cute, friendly, and innocent son named Wilie. Wolffy also occasionally works with the rest of his pack and with Wolnie's cousins and relatives.

Wolffy and Wolnie are hungry, and the goats look very appealing. Once an Episode, Wolffy plans new elaborate ways to catch and eat the goats (usually at Wolnie's demands). Wolffy's plans have varying amounts of success, but no matter how close Wolffy gets to catching the goats, Weslie and his friends always foil Wolffy in the end. The goats go home, free and victorious. Wolffy never gives up and he says he'll come back to try to catch the goats again. Wolffy goes home only to receive more beatings from his wife Wolnie.

While the earlier seasons are a simple Road Runner vs. Coyote story, the show's later seasons and its movies add in more unique fantasy, action, and exploration with new settings and characters.

There's also a Spin-Off called Pleasant Goat Fun Class, where the characters are aged-down adventurers who learn all about the world around them. To see tropes related to that series, go check out its trope page.

The show is very obscure in most places outside of its home country, though some people watch it while learning Mandarin. In the 2010s, an Asian English dub aired on Disney Channel networks in the Asia-Pacific region, but the Disney contract was canceled before it was supposed to end in 2016. In the United States, the season Dear Little Wish and the first two seasons of Fun Class could be watched on Miao Mi

before it was removed from Amazon. Creative Power Entertaining began uploading the English dubs for free on their official channel

on YouTube and then went on an unexplained hiatus and deleted the episodes after they began. Eventually, a new channel

was created for English episodes.

See also the character sheet and list of episode recaps.

"Even though I'm just a little goat, I have more tropes than you can imagine...":

Tropes specific to the films:

In general/unsorted
The Super Adventure
The Tiger Prowess/Desert Trek: The Adventure of the Lost Totem
Moon Castle: The Space Adventure
Mission Incredible: Adventures on the Dragon's Trail
The Mythical Ark: Adventures in Love & Happiness
Meet the Pegasus
Amazing Pleasant Goat
Dunk for Future
I Love Wolffy and I Love Wolffy 2

The projectile bounces on the walls, hits kitchen items, hits a pole, and hits the rock underneath Wolffy's pot, causing the pot to tip over.

The projectile bounces on the walls, hits kitchen items, hits a pole, and hits the rock underneath Wolffy's pot, causing the pot to tip over.