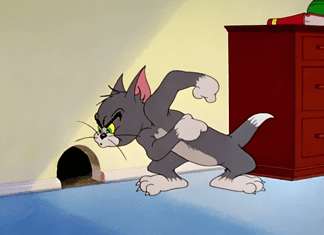 Tom, ready for a game of cat-and-mouse.
Advertisement:

The cartoon mouse's refuge: a neat arch-shaped hole cut into a wall at the floor, sometimes with a door.

If you have one of these in your house, expect your perfectly triangular cheese wedges to go missing soon. Or a mouse comes out to scare you.

The holes Real Life mice gnaw through walls are of course not so perfectly shaped as these, though the sapient inhabitants of fictional Mouse Worlds might be capable of engineering them. However, the existence of neat arch-shaped holes in baseboards is Truth in Television, as these were often cut for plumbing installations (especially heating pipes) and are often wide enough that mice can and do crawl through them.