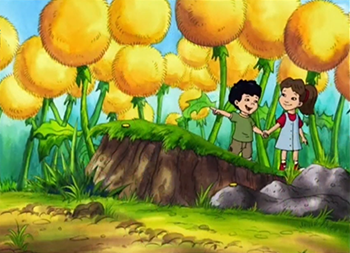 In real life, plants are important in nature. They provide oxygen, pollen for bees, food for herbivores and they make your garden look nice.

In fiction, however, things can get much more diverse and much, much stranger. Fantasy and sci-fi writers like to create their own unique plants with bizarre appearances and properties. Some may be carnivorous, fast-growing, explosive, springy, fiery, or even sentient.

You get the idea. They're very strange plants. They may be magic or found on alien planets or in other dimensions. If someone can control these things watch out.

In some cases, they don't have to be any particularly wild properties, and are more or less just analogues for real plants or fruit, but they're still called something fantastic. If unusual-looking plants or plant analogues make up a large portion of the background flora, this can overlap with Alien Landmass.

And yes, while they aren't technically plants, fungi are included here too.

Only in Wave World will you find flowers that cause a giggle fest.

Only in Wave World will you find flowers that cause a giggle fest.