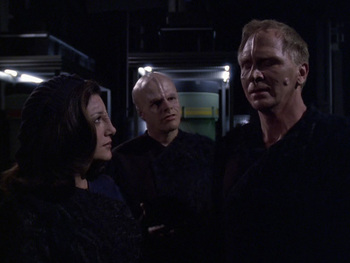 Seven Of Nine's past comes back to haunt her. Well, okay, it always does, but this is a particularly unfortunate example.
While Voyager is docked at a space station, Seven of Nine comes across three former members of the Borg who are linked with each other and are now trying to become individuals again. Seven realizes that these three former Borgs were part of her unimatrix who had crash-landed on a planet together and were trying to send a beacon to the Borg to be rescued and reassimilated. As she and the three former Borgs try to find out why the three of them have been linked together even after they have been liberated from the collective, they soon discover that Seven was responsible for linking the three Borgs together when they were rediscovering their former lives before they became Borg and desired not to become integrated with them again. The Doctor tells Seven that he could remove the linkage between the three former Borgs, but they would only end up living no more than a month or so. Believing that a short time to experience freedom from the Borg and from each other is preferable to the other option of having them spend the rest of their lives reassimilated as Borg, and equating her situation of being liberated from the Borg to the Doctor's growth as an individual on board Voyager, Seven chooses the former option for the three former Borgs.