Please Keep Your Hat On 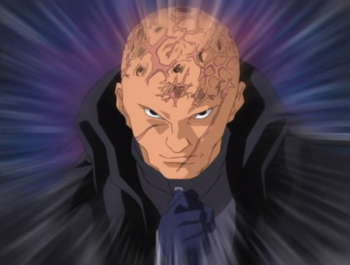 "BALD! BALD! BALD! BALD!"note "MY EYES!"
When you see someone who wears a hat, helmet, or other cranium accessory all the time, eventually you're gonna wonder why. Then you finally see them sans headwear... and you realize that there's a very good reason. Maybe they have terminal hat hair. Maybe it's just a stupid hairstyle under there. Maybe their hair is very very expansive when not contained by the hat (regardless of how big the hat in question is). Or maybe their scalp is deformed or horribly scarred.
Advertisement:

Not to be confused with You Can Leave Your Hat On or Please Put Some Clothes On.