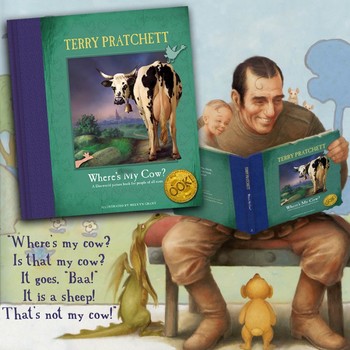 Not exactly the book mentioned in the Discworld book Thud!, Where's My Cow? uses three distinct art styles. It tells the story of the time (mentioned in Thud!) when Vimes changed the story to a more "city-appropriate" version, removing the animals and putting in city people. The first, most realistic, art style is the real world events. The second, highly simplistic, is for the Where's My Cow? book itself. The third is a cartoony style that anthropomorphises the toys and paintings, a visual description of young Sam's imagination. As young Sam gets more and more worked up the art styles blend together.

Where's My Cow? provides examples of the following tropes: