Film / War of the Gargantuas 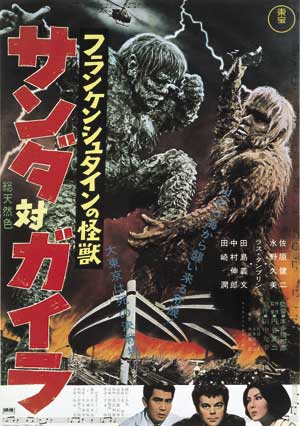 "Hey look! Another one!"
The War of the Gargantuas (or Frankenstein Monsters: Sanda vs. Gaira in Japanese) is a loose 1966 sequel to Frankenstein Conquers the World, though the American version removed all references to the prior film, save for a mention of a severed hand, while the Japanese version explicitly references it, with Gaira being called a Frankenstein monster several times. The film stars Russ Tamblyn, Kumi Mizuno, Kenji Sahara, and Kipp Hamilton. Gaira was portrayed by Haruo Nakajima and Sanda was portrayed by Yu Sekida.
Advertisement:

The plot concerns two giant, hairy monster brothers spawned from the scattered cells of Frankenstein. One of the monsters, Sanda, is benevolent and peaceful, while his brother, Gaira, is savage and destructive (and also has an appetite for humans). Upon discovering his brother's brutal actions, Sanda, who is fond of humans, attacks his evil brother. What follows is a series of battles that eventually culminate in a showdown in Tokyo. Their fighting somehow sparks an undersea volcanic eruption, and the two are enveloped in the volcano's wrath.

Despite once again being made as a co-production between Toho and Benedict Pictures, the film never saw stateside release until 1970, where it played on a double bill with Monster Zero, which also reached U.S. shores four years late. There also exists an alternative Hong Kong Dub that corresponds to the Japanese version.

This was also the movie that inspired Brad Pitt to get into acting. No joke.