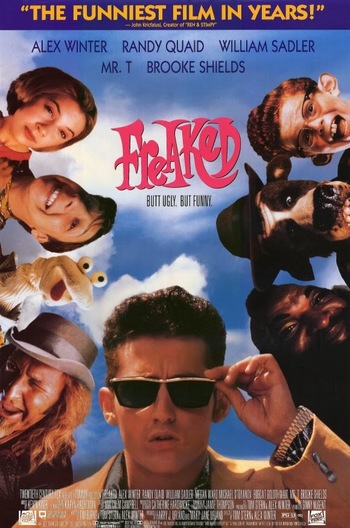 "...In Freaked, there's a scene where they throw a mutant kid out of an airplane and he falls thousands of feet to smack into the ground. And every time I'm about to trick myself into thinking I have a sophisticated sense of humor, I catch myself rewinding that scene five hundred times."
— Seanbaby
Advertisement:

Freaked is a 1993 cult comedy movie co-written by, co-directed by, and starring Alex Winter.

The film centers around Ricky Coogan (Winter), an arrogant blockbuster actor and spokesperson for a company that produces toxic chemicals, who travels to South America to get a first-hand look at the chemical's effects. He finds himself at a mutant freak farm run by Mad Scientist Elijah C. Skuggs (Randy Quaid), who eagerly turns Ricky into another subject for his freak machine.

It was originally pitched as a low-budget vehicle for the Butthole Surfers, but went through a number of rewrites, eventually developing into a Black Comedy set within a sideshow.