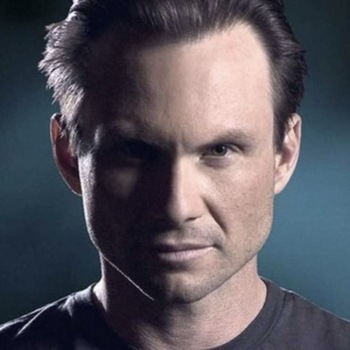 Why the hell was I in Star Trek VI?
"In truth, making films doesn't feel like hard work because I always have such a good time doing it."
Advertisement:

His family has deep ties to the entertainment industry. His mother is Mary Jo Slater, a noted casting director who's been nominated for multiple Emmys for her work, and his father is Michael Hawkins (né Thomas Knight Slater), an actor.

He is best-known for a string of bad-boy roles that stretch from the 80s to the 90s such as in Twisted and Heathers. He tried branching out into more traditional heroic roles before re-embracing edgy parts in the 2000s. After a brief dip in his career marked by multiple critically lambasted and short-lived TV series and DTV films, he returned to the spotlight with Mr. Robot for which he won a Golden Globe. His career has been generally strong ever since.

He is also a die-hard Trekkie. The reason his eyebrows look like they do is because he'd shaved them as a child to try and look like Mister Spock and they didn't grow back properly. He also had a cameo in Star Trek VI: The Undiscovered Country thanks to his mother, who cast the film.