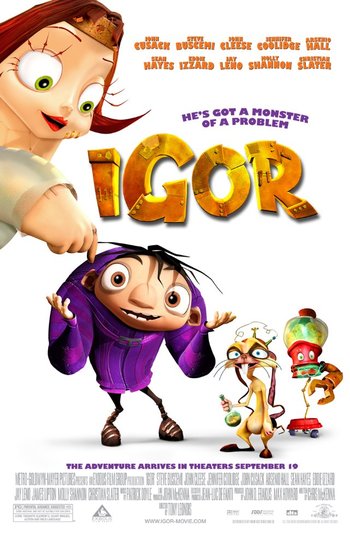 A 2008 CGI animated film that spoofs and references various horror movies, most obviously Frankenstein. Set in Malaria, a country that thrives on Mad Science, and where all hunchbacks have no choice but to become Igors. The title character, however, has plans to break free from his station and become a Mad Scientist himself, with the help of his friends Scamper, an immortal and suicidal rabbit, and Brain, a robot brain in a jar. Igor's attempt at creating an evil monster backfires, and he ends up creating an Ugly Cute Monster Girl named Eva, who isn't evil in the slightest and would rather be an actress.

Igor's quest for glory is hampered by Dr. Schadenfreude, who has won the Evil Science Fair every year by stealing the winning invention from an actual Mad Scientist, and who sees Eva as his ticket not just to winning, but to taking control of the kingdom from King Malbert, who has a secret or two of his own. On top of that, Igor starts to develop feelings for Eva and begins to question the way the kingdom is run. Is being evil really their only option? And can a giant actress in a red dress really win the Evil Science Fair with showtunes?

Dr. Schadenfreude was deliberately designed to look like a cross between Elton John and Marilyn Manson.

Dr. Schadenfreude was deliberately designed to look like a cross between Elton John and Marilyn Manson.