Film / He Was a Quiet Man 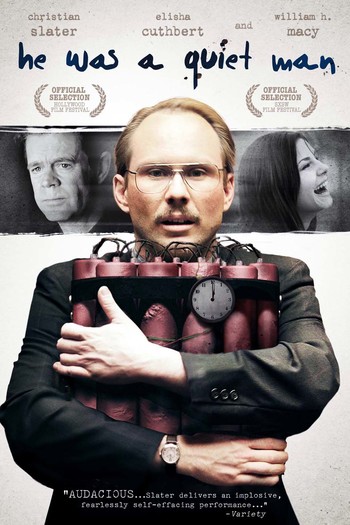 He Was a Quiet Man is a 2007 drama film written and directed by Frank Cappello, starring Christian Slater, Elisha Cuthbert, and William H. Macy.

Bob Maconel (Slater) is an office drone who fantasizes about killing his co-workers with the gun he keeps in his desk. One day, after loading his gun and dropping a bullet, Maconel hears gunshots being fired; the man in the cubicle beside him, Ralf Coleman, has apparently gone postal. After a brief conversation, Maconel guns down Coleman and becomes a hero, also saving the life of Venessa (Cuthbert), although she is rendered quadriplegic by the bullet that hit her. Even as Maconel is hailed as a hero, gets promoted to upper management by his boss (Macy), and slowly wins over Venessa, he can't help but feel out of place in this world.

Not to be confused with The Quiet Man.