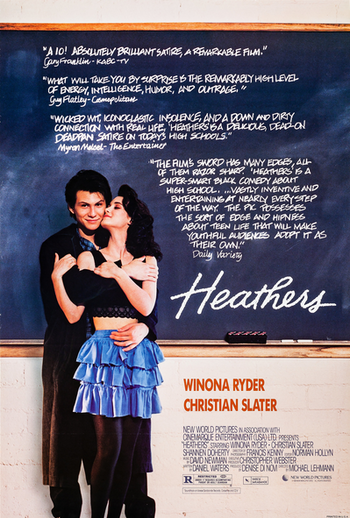 The film is an extremely dark deconstruction of the then-massively-popular wave of '80s teen movies. Veronica Sawyer (Ryder) is an unhappy member of the most popular and powerful clique at Westerberg High, the "Heathers", so-called because the other three members all share the same first name. Then, a mysterious new guy named Jason "J.D." Dean (Slater) enters Veronica's life. After alpha Heather Chandler kicks Veronica out of the group, they accidentally poison her with drain cleaner and have to make it look like suicide. Pretty soon, the bodies start piling up as Veronica realizes that J.D. is a psychopath with ambitions tied into his nihilistic views of human behavior.

At once one of the most cynical and hilarious films of the era, Heathers was a box-office flop when first released but subsequently became a cult favorite, albeit largely for reasons completely different from what the writer intended. While Waters conceived the film largely as a biting satire of the sensationalization of teen suicide, fans opted instead to focus on how J.D. and Veronica "heroically" killed off their school's bullies.

The history of the film's release added to its cult status: the studio that produced Heathers went out of business within weeks of its release, ensuring that it only had a brief run in theaters. However, critics loved the film and it would become popular with its home video release (and countless airings on cable, granted in Bowdlerised form). That said, the film's influence can be seen in later Black Comedy high school movies, like 1999's Jawbreaker and 2004's Mean Girls, the latter being considered to be its PG-13 Spiritual Successor.

The film was later adapted into a 2010 stage musical with a limited run. The musical has been revived as an Off-Broadway production for the spring of 2014, and later as a very successful 2018 run in London's West End. An anthology series based on the film was set to premiere in 2018 on Paramount Network, but was dropped in light of two school shootings that occurred in March and May of that year, and released in an edited version in October.

Why exactly corn nuts were on her mind during her last moments is a riddle for the ages.

Why exactly corn nuts were on her mind during her last moments is a riddle for the ages.