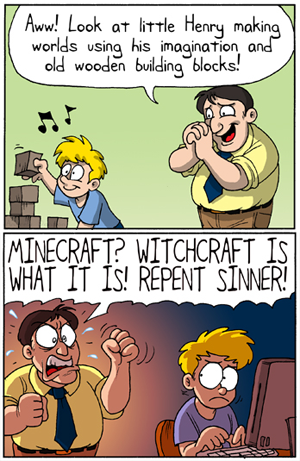 There's always going to be The New Rock & Roll, that new fad or thing that causes whippersnappers to act all crazy and wild like they've all gone bonkers. Typically, this is a fringe phenomenon, and political and religious radicals will be bewailing the development while the media just reports on it.

At other times, though, the negative press goes far beyond basic opinions and phenomena that we can document on camera. Speculation goes on that devious things are afoot. When this goes too far, a reporter is at risk of spouting "New media are evil!" Otherwise-rational people faced with uncertainty about what the New Media is actually like decide that — just to be safe or to grab some attention — they should go with the most inflammatory, headline-grabbing description they can come up with.

The motivation to demonize a medium can go much deeper than the desire of the media itself to make headlines. In our giant, pan-corporate world, there's a good chance that some news outlets are owned by a guy who owns a major recording label. All of a sudden HQ's interest in stories about devious pirating activities becomes quite noticeable. To an audience generally uninformed about what the New Media is like to begin with, whether or not the story is true is irrelevant: the ring of truth is what becomes important.

Bear in mind that the impression given can largely be due to ignorance, the Cowboy BeBop at His Computer misstep taken by someone who is already predisposed to distrust this "Cowboy Bebop" character in the first place.

Take the Internet as an example; though it has come to dominate our lives today, it had a much greater mystique in The '90s when it first became mainstream. People taking up professions in the media industry as a career and most of the people involved today still don't have a full grasp on what the Internet is, so when the assumption is that It's a Small Net After All, all of a sudden every little instance of graphic pornography or 4chan vandalism ends up speaking for the Internet as a whole. This mentality decreases a great deal once the industry and society have adjusted to major technological advances and sees them as the norm. In other words, when the Medium stops being New, it stops being Evil.

This is by no means limited to the Internet, although the sheer density of information we receive today can make it seem that way. Almost every new medium of communication or expression that has appeared since the dawn of history has been accompanied by doomsayers and critics who have confidently predicted that it would bring about The End of the World as We Know It by weakening the brain or polluting our precious bodily fluids.

The same thing has happened to basically every type of media in history, making this trope as old as mankind itself. Writing itself was hugely suspicious for example, as people feared that it would cripple the ability to memorise things, as this was now no longer needed as everything could be written down.

Sometimes the doomsaying has a kernel of truth. New media do change old media, sometimes for a net loss of quality in art or information. Most often, though, the new medium allows a new freedom from the old medium that makes for more opportunity. This is Older Than They Think, as you can see from the very first examples.

Supertrope to Social Media Is Bad and Digital Piracy Is Evil. See also: murder.com, Everything Is Online, Clickbait Gag, There Should Be a Law, TV Never Lies, You Can Panic Now, Books vs. Screens, Cyberbullying, and Appeal to Tradition. The opposite usually ends with Old Media Playing Catch-Up. If books or other forms of written communication are portrayed as superior, it may also be an example of The Power of Language.

The inversion of this trope, when new media develop a similar attitude toward the old boys' club, is Old Media Are Evil.

Don't forget that Old Media was NEW back then.