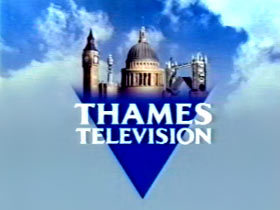 "A Talent For Television."
—Motto
Advertisement:

Thames Television was a company broadcasting on the ITV television network, covering London and parts of the surrounding counties on weekdays from 30 July 1968 at 7pm, until 11:59 PM on 31 December 1992.

Formed as a joint company, it merged the television interests of British Electric Traction (owners of Associated-Rediffusion, later renamed to Rediffusion London, owning 49%), and Associated British Picture Corporation (owners of ABC Weekend Television, owning 51%); this stemmed from the 1967 ITV franchise round, where the Independent Television Authority, for a variety of reasons

, opted to keep both companies around in some form but award the London weekend contract to a promising new consortium, which would become Thames' rival, LWT. However, both companies — during their debut week, no less — were taken off the air thanks to striking union members; this spread across ITV and a temporary service broadcast nationally took to the air before the ITV companies settled the strike after four weeks.

Thames' pedigree, already impressive thanks to ABC and Rediffusion, grew over the years as they became a powerhouse in drama, comedy, variety and kids programming, alongside regional programming, then a big part of ITV; the company soon began exporting their product all over the world, including to the US and Australia. They formed Thames Video in the early 1980s to release their massive library of content on video. Perhaps the best-known Thames personality was that of Benny Hill, whose comedy show became a huge international success.

On 16 October 1991, Thames learned it had lost its London Weekday ITV franchise to Carlton Television, which would take over at midnight on 1 January 1993. It's a long and complicated story, and 3 other ITV franchises; TV-am (national breakfast), TVS (South and South East of England) & TSW (South West England), also lost their franchises. But either way, after it lost its franchise, Thames reorganized itself on becoming the independent production company it still is today. (Many claim that the real reason Thames was kicked out was because of their documentary "Death on the Rock

" blowing back into a big scandal, pissing off Margaret Thatcher, who decided to deregulate the system to punish Thames {the major union issues Thames and ITV in general suffered from was another mark against them in her eyes}).

Thames in the 1990s continued to provide programming to ITV (albeit via other companies presenting it on their behalf) and to other UK networks. They attempted to get back into the broadcasting game by partnering with Moses Znaimer to create localized versions of Toronto's Citytv across the UK, but their bid failed; the license went to another consortium that wound up launching Channel 5 in 1997.

After Thames was acquired by Fremantle Media it was merged with another Fremantle company, Talkback Productions, to form a new independent production company Talkback Thames; consequently, Thames ceased to exist as a separate entity. However, it was announced on 22 November 2011, that from 1 January 2012, the Thames brand was to be revived and Talkback Thames has now been split into four different labels; Boundless, Retort, Talkback and Thames within the newly created Fremantle Media UK production arm.