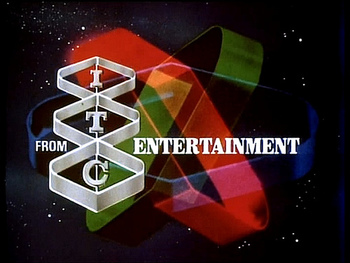 The Incorporated Television Company, or ITC (or in later years, ITC Entertainment) was one of Britain's finest film and television production companies, creating tons of long-running hits shows, including most of Gerry Anderson's "Supermarionation" projects and much of Jim Henson's output in the 1970s and early 80s. The company was originally owned and ran by legendary British entertainment mogul Lord Lew Grade.

The company's origins date back to 1954, when Grade and two associates set up the "Incorporated Television Programme Company", hoping to snag a contract in the then-new ITV network (the first commercial TV network in Britain). Their application was denied by the ITA (since they thought that giving Grade a company would too much control of the entertainment business to him; he also owned talent agencies and theater companies); however, ITC was free to make shows on their own and sell them to the ITV companies. The Adventures of Robin Hood was the first of these shows, though it was also produced in the aim of selling it to the United States and making a profit (which would be Grade's foremost goal at ITC from then on). Ultimately, Grade wound up getting into ITV anyway, when one of the consortiums (who had won the prime London weekend contract) ran into financial difficulties, and Grade subsequently bought a majority stake in the company. (Originally known as "ABC", issues with another contractor owned by ABC Cinemas meant a hasty rename, to "ATV". ATV subsequently got a weekday contract in the Midlands; in 1968, they went 7-days in the Midlands, while giving up their London contract to newbie LWT.) ATV and ITC would ultimately be re-organized by 1966 into the holding company ACC (Associated Communications Corporation), with ITC distributing ATV's productions outside the UK; conversely, ATV would be responsible for distribution of ITC productions within the UK.

Over the next few years, ITC would make bank by creating unusual for-the-time shows (nowadays classified as "cult TV"), including The Saint with a young Roger Moore (which earned ITC around $350 million, and inspired a profusion of similar shows such as Department S), and Danger Man and The Prisoner, both with Patrick McGoohan in the lead (with a long-running theory that both characters were in fact the same man). As mentioned, Gerry Anderson was backed by ITC and his landmark "Supermarionation" shows like Thunderbirds and Captain Scarlet and the Mysterons, as well as non-puppet sci-fi including UFO and Space: 1999 were produced through ITC. Perhaps because of this, Lew Grade was the only one interested in Jim Henson's pitch for a Muppet-based variety show. The Muppet Show went on the air in 1976 and spawned an enduring cast of characters. The sheer amount of exporting ITC did earned them the Queen's Award for Export several times. This was what, for a while, kept the ITA/IBA off Grade's back — they weren't happy about him focusing on his big-budget, exported ITC productions, whilst neglecting the Midlands area ATV was supposed to be serving. (ATV had kept their Elstree studio facilities near London even after 1968; the company continued to be headquartered in London as well. In fact, a common complaint joke among ITA executives was that Grade was more interested in programming for Birmingham, Alabama than Birmingham, England.)

The company also expanded into film production beginning in the early 1970s. Some of these were spinoffs of other ITC productions, but others were completely new. In one case, they produced an entry in a franchise that wasn't theirs — The Return of the Pink Panther. 1979 saw ITC partner with fellow British entertainment company EMI (who had, ironically, acquired the library of ATV's one-time rival ABC, shortly after ABC became part of Thames Television) to create a new company called Associated Film Distribution (or simply AFD). Both had been relying on other companies to distribute their product to the lucrative US market (ie. The Eagle Has Landed was distributed by Columbia Pictures), and sought to do it themselves. Their first release, The Muppet Movie, was a resounding success at the box-office (primarily thanks to an empty market for family movies from people other than Disney), and it seemed AFD and ITC were set for the future. They also began distributing their content on video in the US, via a deal with fledgling home video company Magnetic Video. ITC also created several mini-series, most notably Jesus of Nazareth.

1980, however, seemed to be disaster after disaster for ITC and AFD. ATV had won the ITV franchise round, but the IBA was fed-up with Grade's lack of commitment to the Midlands, and ordered a restructuring to reduce his power; ATV had to rebrand and dispose of the Elstree studios, and start a separate news service for the East Midlands (one of the running complaints was that ATV's news operation favored Birmingham and the West Midlands, where ATV was based). This culminated in ATV becoming Central Independent Television on New Year's Day, 1982. This all meant that Grade had lost his easy access to ITV, and easy money to fund ITC's big-budget productions. Another blow was Jim Henson voluntarily ending The Muppet Show in 1980, to focus on feature films and other productions. On the film side of things, AFD's next few releases were flops. EMI's Can't Stop the Music, featuring The Village People, had the misfortune of being released as the anti-disco backlash in the US had reached its' height. Shortly after, ITC's Raise the Titanic! — completed in 1978, but only released that year, likely as an aftereffect of its Troubled Production — also flopped, with Grade himself commenting that "it would've been cheaper to lower the Atlantic." Grade chose to retire from active film production, and the two bombs meant AFD was done for. They opted to sell their remaining backlog to Universal. Ironically, while the films they sold to Universal were generally critical and commercial hits (The Great Muppet Caper, Sophie's Choice and On Golden Pond), one film burned them again. The Legend of the Lone Ranger, a Darker and Edgier reboot of The Lone Ranger that flopped at the box office. (Evidently, Disney hadn't been paying attention when they tried their own adaptation decades later.) Most of this stemmed from their lawyers forcing the original Lone Ranger actor, Clayton Moore, to stop making in-person appearances as his character; audience reaction to the new, darker tone wasn't positive, either. Universal also didn't like another AFD film, The Last Unicorn, and sent it off; its US distribution ended up at a relatively tiny indie label, Jensen Farley Pictures, dooming it to box-office failure, although it eventually became a Cult Classic.

1982 saw the bottom fall out — ACC and ITC were taken control of by corporate raider Robert Holmes a Court; Grade had thought Holmes a friend and allowed him to buy a majority share of the company, only to realize who he truly was when Holmes fired Grade and everyone else. Over the next few years, ITC went from a prosperous British film and television concern to a tiny company that could only get by on distributing their extensive library and meager little productions (mostly TV movies). For a time, they had their own home video label after splitting off from Magnetic Video successor CBS/Fox Video; by the 90s, they switched to LIVE Entertainment for distribution, having been licensing their TV shows to them for years). Jim Henson split off his Muppet assets from ITC by 1985 (thanks to the loss of Grade, who'd been their biggest backer), leading to another financial blow (ITC had been getting 10% of the profits from all Muppet merchandise up to that point). The nadir of this was their attempt to get in on the lucrative syndicated game show market in the US, with the infamous 1990 revival of Tic-Tac-Dough.

The 90s were a quiet period, and for a time ITC even stopped producing TV shows entirely. They were purchased by another British film firm, PolyGram Filmed Entertainment, in 1995, and they even got Lew Grade to return as a consultant. By 1997, PolyGram renamed the company's US division to PolyGram Televisionnote A prior incarnation of this name existed in the 1980s, distributing mainly TV movies and the PolyGram Pictures film library. But the division was closed and its catalog was picked up by King Features/Hearst Entertainment (whose library is currently distributed by Lionsgate); at that time, aside from the aforementioned Tic Tac Dough, ITC/PolyGram also distributed The George Michael Sports Machinenote which was produced by WRC-TV in Washington, D.C., where Michael was the longtime sports anchor; CBS (through Group W Broadcasting) and later NBC Enterprises took over the rights, co-produced the TV series adaptation of The Big Easy, and produced shows such as The Crow: Stairway to Heaven, Motown Live and Blind Date, as well as serving as the US distributor of Due South. PolyGram TV maintained much of the same stuff and management as ITC had before.

Grade died in 1998, and PolyGram was bought out by Seagram's and merged with Universal shortly after, resulting in PolyGram TV being renamed Universal Worldwide Television (which folded in 2002, after Universal re-acquired the USA Network). Meanwhile Seagram's sold the ITC library to infamous ITV company Carlton note who replaced Thames in 1993 after a restructuring of the ITV system brought upon by Margaret Thatcher; they proceeded to buy Central — the former ATV — in 1994 and Westcountry in 1996 in 1999, reuniting the ATV and ITC libraries, and has stayed with the company even as it merged with Granada into one unified ITV company in 2004. The only exception was The Muppets; the franchise was sold to Disney in 2004. However, Universal was haunted from beyond the grave by a project started by Polygram during their control of ITC — the infamous 2004 Live-Action Adaptation of Thunderbirds.

To this day, ITC's productions are still being rerun and re-released on TV and home video and still have cult followings.

Films produced and/or distributed by ITC with TV Tropes pages:

The 1978-1983 ITC Film Distributors logo, as seen from the British theatrical prints of The Muppet Movie, The Big Sleep, and Saturn 3.

The 1978-1983 ITC Film Distributors logo, as seen from the British theatrical prints of The Muppet Movie, The Big Sleep, and Saturn 3.