Series / The Crow: Stairway to Heaven 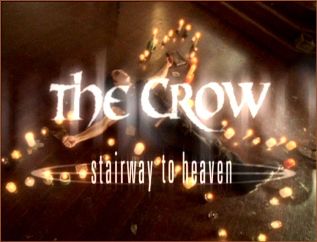 Yup, Eric is played by the future Chairman of Iron Chef America.
Advertisement:

The Crow is a television adaptation of The Crow, itself the film adaptation of the original comic. Produced by Bryce Zabel and starring Mark Dacascos, the series ran for a single 22-episode season in 1998-99.

The series follows Eric Draven, a murdered man who has risen from the grave to get vengeance on the murderers of both him and his fiance Shelly. When Eric is enraged or under stress, his super-powered Crow personality comes out, giving him the ability to fight evil.

Unlike the source material, Eric's Crow personality is confined to an alter-ego, and he's otherwise able to function more or less normally. The series also prolongs the timeline, with Eric engaging in multiple plot lines while under the gun to "put right what was wrong" before Shelly is forced to move on in the afterlife, preventing him from ever reuniting with her. Of course, the series is also Lighter and Softer to make it acceptable for broadcast television at the time, with most of the shocking violence and drug references removed.

The series garnered decent ratings was canceled when Universal bought out its production company Polygram Filmed Entertainment. The whole series was released on VHS, DVD, Hulu