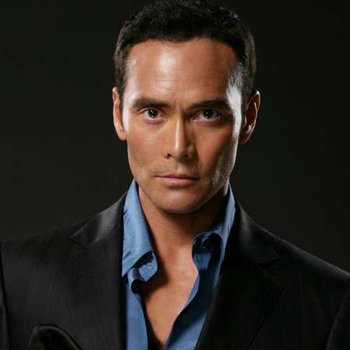 "I consider myself a martial artist and an actor. They can work together or individually. I love to do action. I love having a good role in which I can act and fight. That's double happiness."
Advertisement:

Mark Alan Dacascos (born February 26, 1964 in Honolulu, Hawaii) is an American martial artist and actor. He won numerous karate and various styles of kung fu championships between the ages of 7 and 18 as well as training in Capoeira, Wushu, Tai Chi, Wun Hop Kuen Do and Muay Thai. He is perhaps best known for his roles as kung-fu practicing Native Mani in Brotherhood of the Wolf, Toby Wong in Drive (1997), Ling in Cradle 2 the Grave, and Zero in John Wick: Chapter 3 – Parabellum.

Beginning in January 2005, Dacascos has portrayed the Chairman on Iron Chef America. This role was previously played by Takeshi Kaga in the original Japanese Iron Chef, and Dacascos' character is presented as Kaga's nephew, though the actors are not related.

Some of his other roles include the recurring character of Wo Fat on Hawaii Five-0, Kung Lao in the Mortal Kombat: Legacy web series, Eric Draven in The Crow: Stairway to Heaven, Eubulon the Advent Master in Kamen Rider Dragon Knight and the lead role of Crying Freeman. Dacascos also competed in season 9 of Dancing with the Stars.