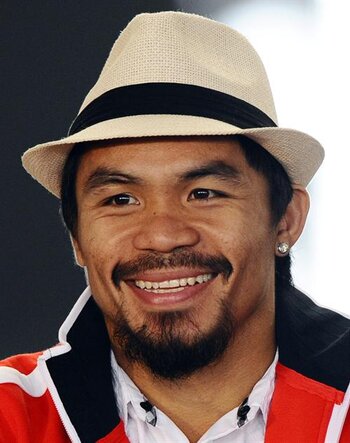 Emmanuel "Manny" Dapidran Pacquiao Sr. (born December 17, 1978) is a Filipino boxer, entertainer and politician, regarded by many as one of the greatest boxers of all time. Besides his boxing and entertainment careers, he also currently serves as a Senator of the Philippines and as party president of the ruling PDP–Laban party. An accomplished prizefighter, Pacquiao has the distinction of being the only eight-division world champion, has won twelve major world titles, and held world championships across four decades: 1990s, 2000s, 2010s and 2020s.

Born in Kibawe, Bukidnon and raised in General Santos to a poor family, Pacquiao was introduced to boxing by way of his maternal uncle, citing Mike Tyson's match with James "Buster" Douglas as an experience that, according to his autobiography, "changed my life forever." Pacquiao also cited Bruce Lee and Muhammad Ali as influences for pursuing a combat sports career.

Pacquiao moved to Manila in his early teens and for a time was a street-dweller, eventually landing a spot at the Philippine national amateur boxing team. Pacquiao had an amateur record of 60 wins and four losses. The death of fellow boxer and close friend Eugene Barutag drove Pacquiao to take up a professional career at just 16 years old, having later admitted to American media that he put weights to his pockets just to qualify for the 105 pound weight limit. His early light-flyweight exploits took place in small local venues which were featured in the Philippine sports TV programme Blow by Blow.

His big break came when he fought against South African boxer Lehlo Ledwaba in an undercard fight prior to the Oscar De La Hoya vs. Javier Castillejo match. Pacquiao's victory against Ledwaba marked his debut in the States, where he would go on to take on a number of Latin American boxers in the 2000s, spawning a series of rivalries against Marco Antonio Barrera, Juan Manuel Márquez and Érik Morales among others. His victories against said boxers brought him to further prominence and led him to take up a myriad of careers outside of boxing, such as singing, acting, basketball and even politics, the latter having initially been met with opposition from his mother Dionesia (who also took on an entertainment career herself following her son's rise to stardom), as well as being bestowed honours from the Philippine government for bringing pride and honour to his country though his athletic achievements.

Pacquiao would later take on Oscar De La Hoya and Ricky Hatton in 2008 and 2009 respectively, the latter being a swift and humiliating defeat on Hatton's part as he was knocked out cold in the second round by Pacquiao. Following his victory against Miguel Cotto, also in 2009, the hype train went on as there was much clamour about a match between Pacquiao and Floyd Mayweather Jr. Negotiations proved sour for several years, and the possibility of a "mega-fight" seemed slim. After years of speculation, interim matches and mud-slinging from Mayweather's camp, the much-awaited fight went on, but proved to be controversial as critics felt that the bout was a disappointment, and fans ridiculed it as more of a "love story" than a boxing match due to Mayweather's tendency to hug incessantly. Pacquiao later admitted that he had a previous shoulder injury which reoccurred during the fourth round. Pacquiao's most recent win was with Keith Thurman, who was defeated via a split decision.

Pacquiao is also known for being very opinionated about politics and religion, even more so with the latter after his conversion to evangelical Christianity. This later drew controversy especially in a statement he made in 2016 regarding same-sex marriage where he derided LGBTQ+ people as being "worse than animals". Notable LGBTQ celebrities in the Philippines, namely Vice Ganda, Ice Seguerra and Boy Abunda took umbrage and condemned his statements; Pacquiao later issued an apology though he affirmed that he still objected to the concept of same-sex marriage as being contrary to biblical teaching, also maintaining that his statements were taken out of context. The controversy led to Nike terminating their partnership with Pacquiao, and for The Grove at Farmers Market to ban Pacquiao from entering their shopping plaza.