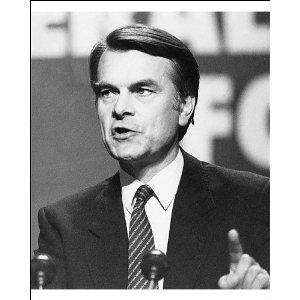 Owen at the height of his career
"I have never been a Liberal."
In response to a heckler who shouted at Owen over his disagreement with the Conservative-Liberal Democrat Coalition Government policy on the National Health Service. (Decades earlier, Owen had opposed the SDP merger with the Liberal Party to form the Lib Dems.)
Advertisement:

David Anthony Llewellyn Owen (born 2 July 1938) born in Plympton, Devon, England is a British politician and medical doctor who served as Foreign Secretary and was co-founder and leader of the British Social Democratic Party (SDP). Owen was also the longest serving Member of Parliament (MP) in the city of Plymouth's history for both the Plymouth Sutton (1966–1974) and later Plymouth Devonport (1974–1992) constituencies. Owen is a controversial figure who currently sits in the House of Lords as an Independent Social Democrat, now no longer eligible to be a crossbencher because he donated money to the Labour Party.

At the height of his career, Owen was talked about as future Prime Minister or Leader of the Labour Party. He was instead one of the "Gang of Four" Labour moderates who co-founded the SDP in 1981 over policy disagreements with the leadership.note In an amusing coincidence, Labour leader Michael Foot had began his parliamentary career representing Owen's then-Plymouth Devonport constituency. The SDP enjoyed a considerable honeymoon period before things eventually unravelled. The SDP and Liberals would field candidates as an electoral "Alliance" for a few years, including in two general elections, and often came just shy of Labour in vote count but well behind them in representation (such that they and Labour blamed each other for 'throwing' some elections to the Conservatives). It went From Bad to Worse after the Alliance's 1987 election defeat when his Liberal counterpart, David Steel, proposed the Liberals and Social Democrats merge into a single party. Owen opposed the merger and things eventually came to a head when the pro- and anti-merger ballots were cast. Owen lost and he subsequently refused to join the new Liberal Democrats, instead forming a rump political party which eventually was embarrassed at the polls by the Monster Raving Loony Party. Owen, ashamed and embarrassed, announced the end of his party and sat his final two years in the House of Commons as an independent.

After his retirement, he unsuccessfully attempted to mediate the growing conflict in the Balkans. Today, he tends to business interests and publishing.