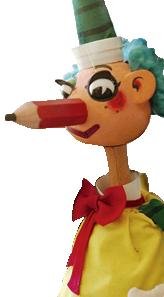 Mr Squiggle, the man from the moon.
Advertisement:

If you were a child that grew up in Australia during the second half of the 20th century, chances are you would have at least heard of one Mr Squiggle. Originally referred to by his full name of "Mr. Jolly Squiggle", he first appeared on the ABC's Children's TV Club before getting his own (evidently more popular) spinoff which started airing in July 1959. Initially the spinoff was intended as a six-week fill-in for another children's show, but the show proved to be so popular (at one point the ABC was getting box-fuls of squiggles from children) that it was back on air that November.

The character of Mr Squiggle was a man from the moon who would come down in a rocket at the beginning of each episode. After greeting his (always female) offsider, he would examine pictures made of random squiggles sent in by young children. After doing so, he would make a picture out of those squiggles using his pencil nose. Upon finishing, the picture would be turned the other side up — et voilà — a picture that actually made some sort of sense!

Apart from his Lovely Assistant, Mr Squiggle also had acquaintances in Blackboard (whom he always used as an easel, often prompting a disgruntled "HURRY UP!"), Gus the Snail (who initially had a TV for a shell, but later had a flower pot), Bill the Steam Shovel (who often told bad jokes and blew steam out of his nose whenever he laughed) and Doormat (who was, erm... a doormat).

The show aired its final episode on July 8, 1999 — just a week after its 40th birthday. Though Mr Squiggle made the odd cameo on television during the Turn of the Millennium, any hope of there being a revival was dashed when Mr Squiggle's creator and performer, Norman Hetherington, died in December 2010 at the age of 89.

The entire cast of puppets from the show are now on display at the Australian Centre for the Moving Image in Melbourne.