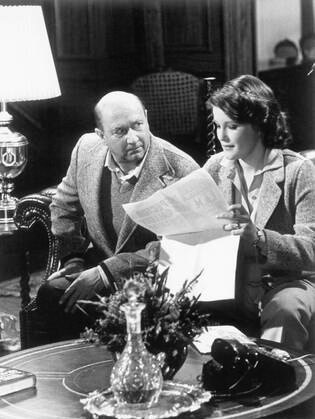 This is the short-lived Spin-Off of Mystery of the Week series Columbo. It is unusual for spinning off a character who hadn't appeared on-camera on the parent series. It starred Kate Mulgrew (later of Star Trek: Voyager) as Kate Columbo, the heretofore unseen wife of Lieutenant Columbo and an Amateur Sleuth in her own right.

When Mrs. Columbo failed to perform as hoped, the show was retooled: Kate divorced her husband, changed her surname to Callahan, and carried out her amateur sleuthing under the auspices of her new job as a small-town newspaper reporter.

The series also changed its title three times during its run, from Mrs. Columbo to Kate Columbo and then to Kate the Detective and finally to Kate Loves a Mystery, before getting canceled. In all, only one season (1979–80) of about a dozen episodes aired on NBC, giving the show quite possibly the highest titles-to-episodes ratio in TV history.

Levinson and Link (the creators of Columbo) have emphatically maintained that Kate Columbo was not the unseen wife of their character, but the wife of some other detective of the same name (who just happens to also have a beat-up Peugeot convertible and a basset hound named "Dog").