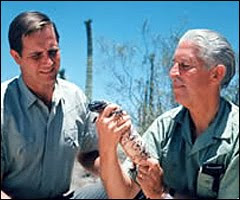 This legendary nature documentary series is indelibly linked with the various Sunday night Walt Disney programs on NBC in the minds of those who grew up during the 1960s and 1970s. Mutual of Omaha's Wild Kingdom ran for 25 years, between 1963 and 1988. Its hosts were Marlin Perkins (who served during a substantial period of the series run as director of the St. Louis Zoo) and buff Jim Fowler. In the early years of the series, Perkins and Fowler went out into the field to tape episodes.

As Perkins got older and more white-haired, he'd remain in the studio while Fowler did the field work. The series was a favorite of comedians and satirists because of its tendency for Perkins to stand off to the side and describe the action (true even when Perkins would go out in the field, but more pronounced as he got older and more studio-bound), while Fowler did the dirty work of actually interacting with the wild beasts featured by the show (and in the process risking life and limb).

It was one of the last big shows to be sponsored by one corporation, in the style of "The Colgate Comedy Hour" or "Texaco Star Theatre" (both of which went off the air in the 1950s).