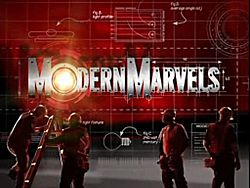 Other former History Series have been made into Modern Marvels episodes, like Tales of the Gun.

There is a series within Modern Marvels called Engineering Disasters, which focuses on things that obviously didn't work. So far there have been twenty-two of these episodes.

History has been uploading entire episodes of Modern Marvels on YouTube. You can watch them over here.